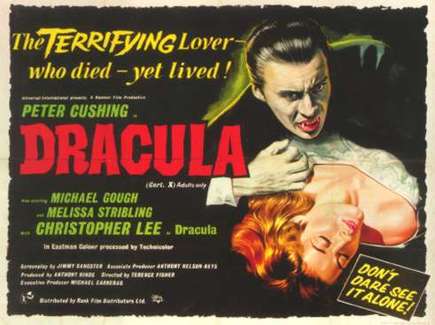 Power. Sex. Eternal life. That is the holy trinity for the Vampire. From the first vampire film, F.W. Murnau’s Nosferatu (1929), to Wes Craven’s Dracula 2000, nearly all vampire stories deal with the addiction to life and lust. Men have crusaded for the fountain of youth and although vampires have found it, it comes at a price. Forced to feed off the living and confined to the shadows, no other vampire has lived the blood-sucking life in more style than Dracula.

Bram Stoker nearly single-handedly created the vampire with his 1897 novel "Dracula." Since then, Dracula has graced the silver screen countless times (Wikipedia estimates upward of 160 films) in many incarnations. In fact, the vampire, Count Orlok, is a moniker for Dracula, as Murnau couldn’t secure the rights to the novel. The infamous character has even been taken to exploitation extremes in Blacula and Paul Morrissey’s Blood for Dracula.

Even in his most cheesy or exploitive role, the vampire is always on the prowl for supple young women to feast on. More than any other horror villain, the vampire is the most suave, sexual predator.  While masked serial killers might be plunging knives, hatchets, etc. into their female victims, the vampire seduces women, exploiting their own sexual desires. When the time is right, he makes his move — plunging his teeth into her neck and sucking the life right out. Thus, he creates an undead hottie that follows him around like an attention-starved puppy.

Like the old saying goes, don’t hate the player, hate the game. While the vampire might enjoy the sexually-charged blood sucking, he’s a slave to it. It rules his life like a drug addiction. He is forced to lurk in the darkness, he has an unnatural fear of wooden stakes and he can never enjoy the tasty delights of garlic bread. But the vampire is never without friends. Unlike the reclusive Dracula, modern cinematic vampires travel in packs — from The Lost Boys to the soon-released 30 Days of Night. These are brothers bonded by blood, who stalk victims like a pride of lions. These usually aren’t friendships of interest, but ones of necessity.

The vampire’s life is one of isolation brought on by his addiction, despite the undead groupies, but his blood gulping antics make for terrifying films. You can catch more of Dracula and his vampire brethren when Blood of Dracula, Dracula 2000, Slaughter of the Vampires and Blood of the Vampires seduce their way onto Monsterfest.

How has this famous fanged villain evolved in the movies over the years? Visit our photo gallery for a quick history lesson on this classic horror icon.