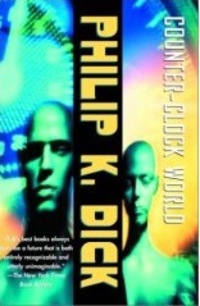 John DeNardo — erstwhile SciFi Scanner guest blogger — has posed an interesting question over on his fantastic full-time sci-fi blog, SF Signal: which unfilmed Philip K. Dick novel would you most like to see Hollywood film an adaptation of?

Of all the Philip K. Dick novels I grubbily absorbed as a youth, the almost unheard of Counterclock World is the one I remember best. This is not saying very much: Philip K. Dick is a novelist of ideas, but since he can’t write a compelling character or plot to save his life, his books all melt into a soup of sci-fi LSD weirdness in the back of my mind.

But Counterclock World stuck with me. The novel is set on Earth and (presumably) takes place after the Big Crunch, when time is moving backwards, but people’s brains still think forward. It’s a novel of wonderful strangeness, featuring characters who are born when they crawl out of the mud as toothless octogenarians and die when they crawl back into their mother’s womb.

But there was one detail I remember very clearly about the book. I can’t do anything but paraphrase the quote (my copy is entombed in my parent’s basement, 6,000 miles, one sea and two continents away), but at one point in Counterclock World, a character remarks on how ever since time started going backwards, eating was like vomiting and going to the toilet was a vile and unpleasant experience.

Now tell me that’s not a visual that you wouldn’t like to see Hollywood wrestle with. Perhaps Christopher Nolan of Memento fame can direct.

What about you? What Philip K. Dick would you most like to see a big screen treatment for? I’m guessing The Man In The High Castle is going to be the more popular choice, but prove me wrong!