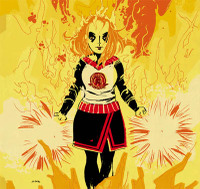 After the latest episode, I think I may be turning the corner of my fondness for Heroes.

It’s happened to me before. Lost, for example: a strong, mysterious sci-fi television show with a great deal of momentum comes back from an excellent first season, tries to regally perform the dramatic equivalent of an Olympic swan dive in Season 2 and instead belly flops spectacularly, revealing at the same moment that the writers and producers only had enough strong ideas for Season 1.

Heroes is making me feel the same way. My impressions of both Season 2 and Heroes in general, after the jump. It’s largely spoiler free, but those who haven’t seen the episodes may want to steer clear.

My largest complaint about the season so far is that all of the characters, with the possible exception of Hiro, feel like they’ve already been wrung dry of any possible character or story development. Let’s face facts: characters like Peter Petrelli and and Claire weren’t terribly interesting to begin with, short of the novelty of their powers and the dire situations they found themselves in. But now, their powers have no mystery, and they situations they are embroiled into are simply boring. It doesn’t help that the actors involved are so one-dimensional.

Which is a larger point, really. Tim Kring meant for each season of Heroes to focus on new characters, but after the success of Season One meant that he had to reunite the cast and continue focusing on them. So far, the story of Season 2 lacks urgency and feels tacked on. Only Hiro â” the last character to be added to the show â” feels like he’s still worthy of concentration, and that’s largely because his character arc is largely about his quest to become a true hero.

But there’s just a lot of little touches in Season 2 that feel cheap. I don’t know why the Heroes casting department feels like they need to scrape the bottom of the thespian barrel, but the acting is, with only a couple of exceptions, lifeless and dull. The girl who plays Claire is a nice dish, but she can’t act. Neither can the Horn-Rimmed Glasses guy. The Irish of Season 2 seem like they picked up their accents from a Shamrock Shake commercial, and even Nichelle Nichols has managed to adopt the most embarrassing Louisiana accent this side of Tim Curry’s portrayal of Gabriel Knight.

I could go on, about the lame, too "clever" by half dialogue between Clare and her smarmy new flying beau, but what’s the point? I’m just not digging it so far. It’s early yet in the season, so I could be singing a very different tune in a few episodes, but it’s really disappointing to me that a show I liked so much in its first season has lost so much steam in the second.

Am I just being overcritical? What do you think?