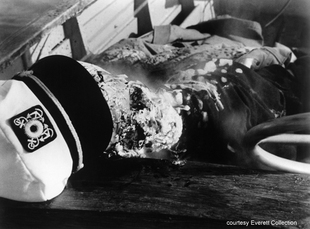 My favorite holiday is the entire month of
October! There’s nothing like celebrating the holidays with a feast. For Thanksgiving you’ve got plain ol’ turkeys for Turkey Eaters, but for Halloween, how about sharing a table with some of the following connoisseurs in these movies?

The Brain Eaters.  Cool and weird, it’s one of those Invasion
of the Body Snatchers, Puppet Masters deals with the people around you turning into mixed up zombies. It’s so much like the Puppet Masters, in fact, that they got sued for it, and
it was yanked from theaters. The
story might be familiar, but the way it’s told is pretty unique. There’s crazy music
and weird old-timey film stock scenes. Sort of avant-gardey. You’ll swear it’s a more recent movie than it
is. Also, Leonard Nimoy, illogically
concealed by special effects, is in it. Check
it out, daddio. Make your living room a
drive-in.

We just mentioned Nimoy, and another familiar face (with
less paint on it) peeks out at you in Curse
of the Living Corpse which is one of those “creative punishment” movies
like Dr. Phibes. Why, it’s Roy Scheider of which I speak
in his first role. If you’ve read this
far, however, you’re more likely to be a fan of Candace Hilligoss from a little
movie men still call Carnival of Souls. The film was made in the 60’s and takes place
in the 1890’s. Nothing beats a period
piece period piece, and by that I mean movies from one long-ago era set in what
was to them a long-ago era.  Hilarious
and cool. Check it out for the costumes.

The costumes get all covered with stage blood in The Flesh Eaters (see AMC airtime), a hidden gem to end
all hidden gems. It gets some notoriety in
the special effects circles for being one of the earliest “gore” flicks and
that shadowy cabal of blood-techs have been keeping it for themselves. No longer! We show it in all it’s B-Movie glory, or what I like to call blory! We present The Flesh Eaters in all its blory. Want a tagline to hook you? Ready? Beatniks vs. Nazi
Scientists! Perfect. Don’t miss, so the next time those snooty fx
guys lay down a reference, you can pick it up.

Finally, for all the Dog-Eaters out there, there’s  Pet
Semetary II (see AMC airtime).  Not only the sequel to
what we all agree was a cool late-80’s frightener, but also the big-screen
follow up for T2’s Edward Furlong. You got Goose from Top Gun as his dad. You probably
haven’t seen it, but I assure you it’s emo-tastic. If you squint, it’s kind of like Lost Boys with shovels.