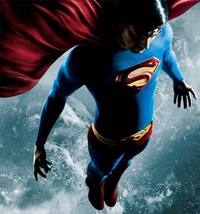 Who’s going to play Superman in the upcoming Justice League movie?
The only thing anyone’s known for sure up until recently is that Warner Brothers isn’t going to mix up their A-list superhero actors: Brandon Routh won’t cross over into Justice League as Superman and Christian Bale won’t make an appearance as Batman.

That’s fair enough: a Justice League movie is likely to be a lot more cartoonish than the more dramatic feature films. So who’s going to play Superman? Current rumor, as reported by Dark Horizon, is that Rupert Evans — an actor best known to genre fans for playing the bland junior agent in the Hellboy films &dash; has been cast as the Big Blue Cheese.

What an utterly bizarre rumor. Rupert Evans is a tiny, meek-looking blond Brit, with none of the pectoral massiveness or lantern-jawed ruggedness one usually associated with the Man of Steel. In fact, he sort of looks like the nerd from high school who just got over his crippling dermatological problems.

Which could be a perfect choice for Clark Kent, certainly. Both DC and Hollywood have had a hard time selling the whole Clark Kent secret identity aspect of the character (although Christopher Reeves did a bang-up job with his nebbish and dorky portrayal in the first two films).

But a Justice League film isn’t likely to spend a lot of time concentrating on Clark Kent. It’s an ensemble superhero picture, not a movie about their private lives. I suppose we won’t know what Warner Brothers saw in him until we see him with black hair and wearing Technicolor tights, but as it stands, this is certainly a puzzling choice.