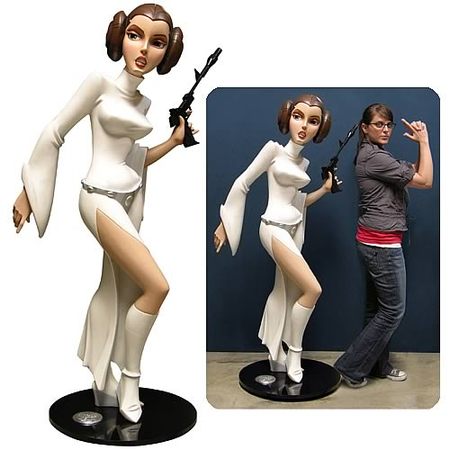 In my mind, Princess Leia was never sexier than she was in A New Hope: her hair done up in cinnamon rolls, clad in a white diaphonous dress clinched at her supple waist and slit far up the thigh, with white go-go boots completing the ensemble.

This was long before we (or, let’s face it, George Lucas) knew Leia was Luke’s sister, where you could pretend in the playground swing set to be Luke grabbing Leia around her waist and swinging across a Death Star chasm without feeling incestuously oogy inside. Her sexiness is only marred by the fact that it was Carrie Fisher playing the role: how odd that Fisher, despite her mousy looks, would become a sex symbol to millions of young boys who grew up with the original trilogy.

But sci-fi collectible makers Gentle Giant have finally done what George Lucas could not: remove the Carrie Fisher from the Princess Leia.

Gentle Giant have just released a five-foot fall fiberglass statue of a stylized Princess Leia, carved not in the likeness of Fisher but the way she would looks in animated form. Of course, dragging Leia off to your bedroom is going to cost you: the going price is an astounding $799.99.

It’s some beautiful work, but to be honest, I don’t really like to think what the Star Wars fan willing to pay $800 for a life-sized statue of Princess Leia is going to do with his prize once the UPS guy drags it down to his parent’s basement and dead bolts the door behind him. I think we can probably count our lucky stars that this isn’t Gold Bikini Leia, though.