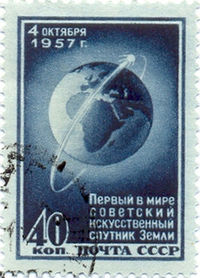 On October 4th, 1957, the Soviet Union launched a strange-looking orb of alloy and metal into orbit around the Earth. And while it’s easy to scoff at our parents’ paranoid fears that Sputnik was the harbinger of global-nuclear warfare (although these fears really weren’t all that paranoid), sci-fi fans owe Sputnik a debt of gratitude for inspiring some of the greatest films to come out of the sub-genre of Cold War sci-fi.

America was shocked when the USSR first announced it had launched Sputnik I, the very first man made satellite, into geosynchronous orbit with the Earth. Sputnik 1 was about the size of a basketball, weighed over 183 pounds and took 98 minutes to orbit the earth.

That satellites would be launched in 1957 was not terribly surprising: the International Council of Scientific Unions had declared 1957-1958 as an International Geophysical year, based upon the high volume of solar activity that year. What was so surprising was that the technologically backwards Soviet Union had managed to beat America, Tamer of the Atom, into space. America had attempted two launches earlier in the year with its Vanguard series of satellites… launched that proved to be spectacular failures. When the USSR managed to get Sputnik up into the skies before us, Americans feared that the balance of power had shifted. That strange steel orb swooshing across the sky could be followed by ballistic nuclear missiles.

Of course, none of that ended up being true: in less than a decade, America had totally destroyed any space age superiority the Soviets may have had. But Hollywood took notice of prevailing fears. And although films like Invasion of the Body Snatchers, The Day The Earth Stood Still and Invaders from Mars had already defined the genre of Cold War sci-fi, the matinees were suddenly filled with films in which we looked to the skies with alarm. The launch of Sputnik is largely considered to be the event that drew to a close the Golden Age of Science Fiction.