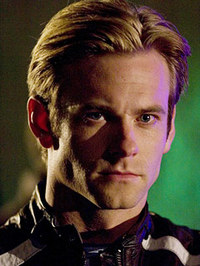 Somehow, they managed to take a franchise that had wonderfully warm and goofy connotations in the minds of numerous generations of fans — from old geezers who grew up with Buster Crabbe’s delightfully cheesy serials; to comic fans of the 50’s and 60’s who lay on their floors on Sunday morning enraptured by Gordon’s 4 color adventures; to Generation Xers who still sing the theme song of the early 80’s Dino Di Laurentiis version — and managed to wring the juice out of it, systematically stripping out every single element that made the previous versions of Flash Gordon great.

This show’s not going to last more than a season, so the executive producer, David Hume, is doing a press rounds, assuring journos that the two biggest complaints so far will be addressed in the second half of the season: we’ll see more Mongo and Ming will be meaner and stronger.

“Well I like actually like what you’ll see coming up is you’ll learn a lot more about the Planet Mongo and how it got to be the way it is and how Ming is. I like this new Ming and that he’s a really horrible guy but he’s – in a weird way he’s doing things that have to be done to save the planet. So at the end he’s – and he really gets better and better and his character really gets more complex… “He’s just sort of the Saddam Hussein kind of tyrant but ruling a planet that may need a tyrant to be in charge.

First of all, Ming is supposed to be a cartoonish bad guy, and no one cares what his motives are, so you’re already off the plot. Second, that may be the most offensive Saddam Hussein comparison I’ve ever read. I don’t care where you are on the Iraqi War, can we all agree that Iraq didn’t "need" a genocidal dictator who cavalierly had his citizens tortured, murdered and raped? Maybe Mongo does, but it’s an imaginary planet, filled with imaginary aliens, and common human decency suggests that the one thing all people on this planet not only need, but deserve, is a life where their loved ones don’t go missing in the middle of the night.

I rarely go into politics here, but Iraq didn’t need Saddam Hussein. It needed peace and prosperity, and America’s failure in giving it to them is not a failure in the Iraqi national character. Even a crappy sci-fi show that no one watches should remember that.