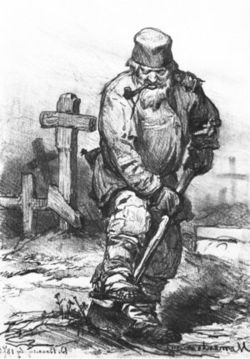 Most new horror films these days take their cue from the slasher classics of the 1980s. Half of them seem to be  remakes (what’s next? Nightmare on Elm Street ?).

The other half sound a lot like Digger — a new slaughter-fest film that follows a girl who gets abducted by the "Digger," except no one believes her. That is, until people start disappearing. Then her roommate disappears, and she tries to convince everybody that there’s this killer out in the woods, and she can’t convince anyone—except maybe this one friend of hers in college. "So Digger is a horror movie that’s wrapped in a mystery with a number of reveals," producer Gregory Segal of Angel Baby Entertainment told Fangoria.

And what’s Digger look like? We’ve seen his type before.

"He carries a shovel, and he supposedly has buried his victims after dispatching them [under] their coffin. He’s along the lines of an iconic horror figure, like a Freddy or a Jason, except he’s not masked," Segal says.

Freddy wasn’t masked either, but usually it takes a number of films, or at least a successful one, to create a horror legacy. With the backing two effects shops — Robert Kurtzman (Bubba Ho-tep) is doing Digger’s make up while Dave Presto is doing the other effects — perhaps Digger can create classic horror iconography out of thin air.