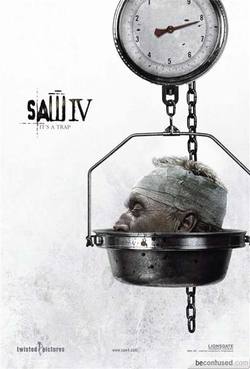 It was horror to the rescue as Saw IV had a big opening over the weekend.  It did around $32 million which is double what 30 Days of Night did on its opening weekend and $20 million more than the number two movie (some comedy with some over-saturated TV star).

That series has some loyal fans, boy.  It wins its week with almost the same amount of money each year.  Take a look at this chart, if you’re into that kind of thing, and see how movies have opened historically on Halloween weekend.  You’ll find the three Saw sequels lining up as 1-3.

There are some pretty funny non-horror entries on there, like Brother Bear.  Maybe it’s early, but it made me giggle.  Happy Halloween, little guy.