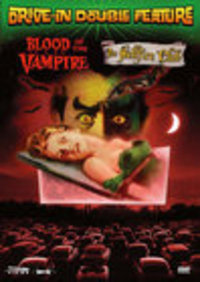 When it comes to classic horror characters, Count Dracula stands head and fangs above the crowd.  More than 150 films have featured the blood-sucking Count, not counting spin-offs like Dracula’s Daughter and The Brides of Dracula. The 1931 film Dracula starring Bela Lugosi and directed by Tod Browning is one of the most famous versions of the story, but there are plenty of other Drac-classics including these campy favorites:

1. Dracula 2000 (sometimes known as “Wes Craven’s Dracula”)
Horror master Wes Craven was the executive producer for this Drac pic from 2000, which stars Christopher Plummer as an English antiques dealer who ends up hunting down the count (Gerard Butler) in spooky New Orleans. A somewhat futuristic take on Dracula that’s worth seeing if for nothing more than the classic Drac line: “You Brits like to sweet-talk. You Brits like to romance, and all I wanna do is suck.”

2. Slaughter of the Vampires
This 1962 film directed by Roberto Mauri is one of many Italian-made gothic horror films that flourished in the late 50s and early 60s, sometimes called spaghetti horror films. In this movie, a newlywed couple enjoying their wedding night find themselves – wait for it – menaced by a bloodthirsty vampire. The dialog is reliably schlocky, but the moody black and white cinematography makes this pic worth a look.

3. Blood of the Vampire
A vampire movie without blood is like a Bruce Willis film without a gun. This 1958 film features plenty of blood, but oddly, no vampire. The plot centers on a wicked warden in a remote castle who imprisons a doctor in order to find a cure for a rare blood disease. Whatever. The plot is a bit campy, but it’s a good old-fashioned horror flick.

4. Blood of Dracula
This 1957 film puts a new twist on the Dracula tale: a blood-sucking girl! In the film, a girl at a reform school is turned into a vampire by hypnosis and sets out to kill her classmates. After a few full-moon murders, the girl discovers that the killer is – gasp – herself! In a way, this film reverses the typical horror movie cliché by making the monster a young attractive heroine. Fans of drive-in movie horror films will find this a fun romp.