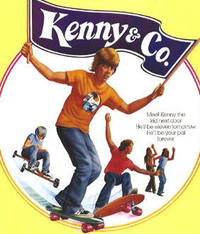 Writer-Director Don Coscarelli earned his place in the Sci-Fi Hall of Fame for creating Beastmaster,  Bubba Ho-Tep, and the Phantasm quadrilogy.  But his second feature, Kenny & Company deserves to be re-discovered.

20th Century Fox didn’t know how to market this genre-defying story of three pre-teen boys enjoying the autumn days leading up to Halloween in 1976.  So the studio never gave the film a proper release. It’s a damn shame, because Kenny is a unique portrait of adolescence rarely seen in American films.

The movie has an episodic, loose narrative that beautifully captures the ups and downs of tween life, all by a director who was only 21 years old himself.

Curiously, it was Kenny’s Halloween Haunted House scene that led Coscarelli to move from slice-of-life filmmaking into the Horror/Sci-Fi genre.  The Director loved watching the audience jump out of their seat when the masked-monster (pictured) frightened Kenny.  He decided that his next movie (Phantasm) would have a scare every 5 minutes.

Coscarelli fans will enjoy the haunting Fred Myrow score, the obsession with death, and the casting of Reggie Bannister and Michael Baldwin.

God bless Anchor Bay for re-releasing this lost gem of a film.  It’s a wonderful treat for the Halloween Season, even if no one gets a silver sphere to the head.