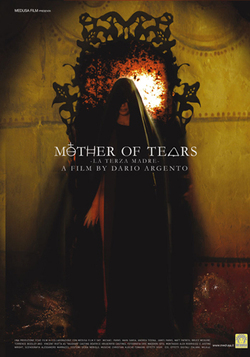 Once you’ve proven yourself as a master horror director, it’s hard for fans to stay away from your projects, even the bad ones. Take Dario Argento for instance. The Italian horror maestro started off strong with his “Animal Trilogy” (Bird with the Crystal Plumage, Cat O’Nine Tails and Four Flies on Grey Velvet) and followed it with Deep Red, Suspiria and Tenenbre, helping to create the Giallo horror sub-genre.

Unfortunately, Argento began alienating audiences with subpar films like Dario Argento’s The Phantom of the Opera and The Card Player. But now, he’s bringing his famed “Three Mothers Trilogy” (Suspiria and Inferno and now Mother of Tears: The Third Mother), in a film to be released in Italy on Halloween. By returning to the series that solidified him as a horror master, Argento has re-instilled hope in many of his fans.

While there’s no word yet of an American release, a high-quality teaser trailer popped up on Yahoo! Italia Cinema (just click on the text next to the little video camera icon). When the genre is feeling stale from countless classic and J-horror remakes, the promise of Argento’s second coming is definitely something to keep a demented eye on.