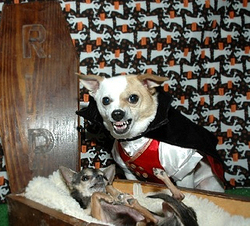 I had a nice, long chat with a good friend of mine in L.A. over the weekend and during the course of the conversation, she asked if I’d seen 30 Days Of Night, which she’d figured I would, me being a horror guy and all.

"No, and I’m not really sure I’m going to either", was my response.  When she asked "Why not?", all I could say was the truth: Vampires aren’t scary anymore.

I suppose if I actually met a real vampire then that might be scary, but vampires in movies and TV?  Nope, they don’t do it for me.  I used to think vampires were real badass and that the idea of living forever and having to kill to live was fascinating, but over time I’ve come to get real bored whenever I see vampires on screen.  Some of it is overexposure (in the last decade alone we’ve had Buffy, Blade, Underworld, and countless low-budget indie and amateur flicks) and it’s also a lack of inspiration; if you ask me, the vampire well is dry.

It’s not that I don’t like any vampire movies; Captain Kronos – Vampire Hunter is my favorite Hammer film of all time and many of the screen versions of Bram Stoker’s Dracula hold my interest pretty well because it’s a solid story.  But how many vampires, vampire victims and vampire hunters can a person watch before getting bored by the enterprise?  I was looking at some of the vampire stills from 30 Days of Night and thought to myself, this isn’t doing it for me.  Vampires with their teeth sticking out and their mouths covered in blood have become such a cliche that any power they once had for me is gone.  Sad but true.

I understand that most vampire stories are often an opportunity to explore themes of mortality, morality, sexuality, addiction, even politics, but even within that framework has anything new been done?  What was the last fresh and original vampire movie?  I seriously can’t remember.  Vampires can be haunting and tragic, as evidenced by Interview With the Vampire, Nosferatu or Dracula, and vampire movies can still be fun, such as From Dusk Til Dawn, Fright Night and John Carpenter’s Vampires, but that’s not the same.  Vampires, as a concept, are done for.  Or am I wrong?  Let’s put it to a poll: