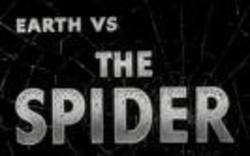 Arachnophobia is the inordinate fear of spiders, and anyone with the condition may want to stay away from Earth vs. the Spider, airing on AMC Friday at 6:15 AM. The 1958 film stars a giant house-sized spider lurking in a cave that soon begins to kill members of a small town.

Earth vs. the Spider was released just after The Fly became a blockbuster, and while the spider never matched the fly in popularity, the two films contain some of the same elements. Earth vs. the Spider features a classic “law enforcement official who doesn’t get it until it’s too late” role, in this case, the sheriff of the small town:

Sheriff Cagle: [to a deputy after finding a desiccated body in a cave] Uh, you get back to town and make up a coroner’s report. Just put down Jack Flynn as the name and the cause of death… uh…

Mr. Kingman, the local science teacher: It was a spider that drained all the liquid out of his body!

Sheriff Cagle: Just put down "cause unknown" and let the coroner worry about the rest. That’s the trouble with you eggheads – you jump to conclusions! I know what I see and I see a dead man, but I don’t see any spider.

Wow, is this guy clueless or what?

Also, keep your spidey senses alert for this classic death scene: one of the spider’s victims is the actor Hank Patterson, who would go on to play Mr. Ziffel on Green Acres, the “father” of Arnold the pig.