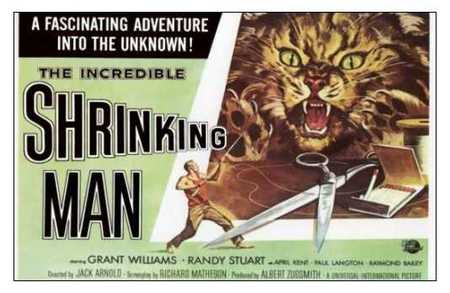 Readers looking for scientific evidence that I may have been born with a deplorable lack of taste bordering on the anacephalic must look no further than the posts I’ve written in which I talk about how much I hated the Edgar Wright helmed comedy films Shaun of the Dead and Hot Fuzz.

I didn’t, but I’m not going to go into that again: I think we can all take it as read that I’m some kind of idiot. So maybe I’m wrong to arch my eyebrow when I read that Edgar Wright is going to direct the upcoming Ant-Man, based on Marvel’s subatomic shrinking superhero.

In his defense, Wright is swearing his adaptation of Ant-Man isn’t going to be a spoof, and I should probably take him at his word. But I would like him to play the shrinking concept close to the cuff… if only because shrinking films tend to go camp. Yet, for me, the central concept of shrinking movies — that size is relative almost to the point of infinity — is incredibly horrifying.

Richard Matheson’s The Incredible Shrinking Man (later made into a fun but campy little film of the same name) really pins down the horror of size: in that novel, the main character shrinks past the point most films stop at — the point where dust mites are giant monsters — and instead finds the protagonist shrinking down into entire new universes, where neutrons and protons form swirling solar systems in an infinite cycle of subatomic galaxies. There is something terrifying about that and I’d like to see a film that slowly faded the camp value of shrinking and fighting house cats into the metaphysical horror of constantly diminishing size.

Despite being the last man in the world I would think would try to tackle Ant-Man seriously, Edgar Wright may well attempt that approach. Here’s hoping.