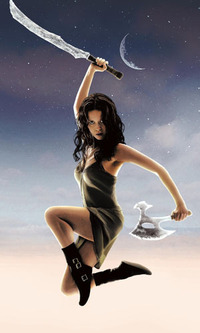 One of the best things about living in the era of the Internet and DVDs is how box office sales (or television ratings) are no longer the sole determining factor when a Hollywood suit mulls over killing a franchise. Both Family Guy and Futurama were resurrected from cancellation because of their brisk DVD sales. The same is true of Joss Whedon’s excellent space western Firefly: strong DVD sales directly led Universal to green-light Serenity, the Firefly movie.

Unfortunately, Serenity didn’t do well at the box office, making chances of a sequel look remote. But it’s deja vu all over again: Serenity DVD sales on Amazon.com are doing so well that Universal is considering a straight-to-DVD follow-up film. Thanks to DVDs and the Internet, the public has have more influence than ever over movie decisions.

According to Tudky, who played Wash in Serenity: “They had to put [the new Serenity Collector’s Edition DVD] out because they’ve been selling out of the other one, and so Universal’s like ‘So, let’s do another one.’ And now… there’s now a chance there’s going to be another movie.”

This is fantastic news for Browncoats: it’s pretty clear at this point that Firefly can only continue as a franchise when DVD sales are the primary factor. The big question is whether or not it’ll be a prequel to Serenity or a sequel? At least a couple important cast-members died in the film, so to reunite the whole cast, any DVD follow-up would have to take place either during the series’ timeline or in the gap between the television series and the film (which would, itself, be a tricky prospect: that gap period has already been well established in continuity by a series of comics Whedon wrote to promote the film).

Let’s hope this rumor is more concrete than an idle “Wouldn’t it be awesome?” remark by a sympathetic Universal executive.