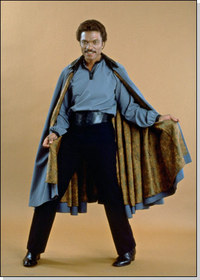 At a recent press conference, to delighted metrosexual titters from the crowd, J.K. Rowling announced that Albus Dumbledore was gay, and while people like me issued a collective yawn, a lot of folks really seemed to care.

I don’t really have any opinion one way or the other about Professor Dumbledore’s homosexuality except to say that I find thinking about an 80 year old’s sexual peccadilloes to be nauseating regardless of their orientation. But one interesting ramification of the news is that it has caused the entire blogosphere to erupt into speculation about what other characters may be gay.

New York Mag’s Vulture Online has posted their list of characters they think may be closeted gays and there’s a good number of sci-fi characters being unceremoniously outed. Why, yes, come to think of it, Lando Calrissian did wander around in a leather vest and a gold cape, and all of his sonorous seduction reeked of overcompensation. But Spock? He was married twice. I’m pretty sure he’s as straight as Vulcans come. Which, come to think of it, is plenty gay to begin with.