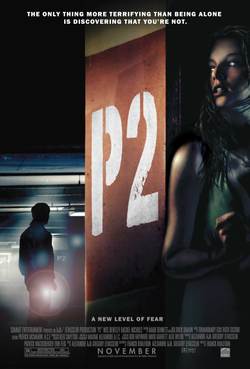 Alexandre Aja could still be the next great horror director. The first 30 minutes of 2003’s High Tension smacked you right in the face with a simplistic intensity; one that hearkened back to the good ole days of the classic slasher — a motivation-less killer stabbing, crushing and slicing anyone in his way. Though High Tension‘s atrocious third-act twist and Aja’s vile 2006 The Hills Have Eyes remake are two strikes against him, a trailer and two clips of his new project P2 have popped up on its official site.

If you missed Aja’s cinematic flare for stylish framing, it’s because Aja was behind only behind the pen as a writer and not the lens. The story follows a young woman who is trapped in a parking garage on Christmas Eve and has holiday cheer shoved down her throat by a lonely, albeit psychopathic, security guard.

Directed by Frank Khalfoun, P2 feels a bit amateurish from the clips and trailer. Hopefully, Aja’s (positive) influence as the writer and producer will rub off on Khalfoun. One could hardly call strike three on Aja if P2 flops. We’ll have to wait for his Mirrors (a remake of the Korean thriller Into the Mirror).