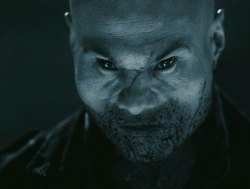 Saw 30 Days of Night tonight.  I could have pulled a few Horror Department strings and seen it early, but then I would have been denied the pleasure of seeing it with a herd of goatlings.  Don’t you worry none about having it spoiled.  Anything sensitive will be after the leap.  Before you click it, though, enjoy my crackpot theory on movie theaters.

As some of you have expressed in comments in other posts, the theater experience for this particular movie is worth it.  Going out to the movies now is a lot closer to what is was like fifty or sixty years ago, with folks talking and shouting and gasping.  If you’ve seen Cinema Paradiso, you know what I’m talking about.

For most people it’s better to watch movies at home.  You can control the horizontal and the vertical, you can eat leftover boneless buffalo wings instead of yesterday’s garbage bag full of popcorn, and you can rewind or pause or fast forward or stop.  The only reason to go out is for the shared experience, to hear other people having a good time, specifically people you don’t know.  You want the raw emotion of the unknown!

People who shush you in the theater are like the people who tell you to sit down at a baseball game.  If you don’t want to stand, catch it on TV, pal.

So, comedies, action movies and horror films are worth going out for.  Romance movies and epics a waste of time.  So what happened at 30 Days of Night?  Take the leap.

Once your eyes adjust to the glare of the early snow shots combined with the answering audience glare of cell phone monitor screens waving around, you settle in to a pretty moody film that kind of hearkens back to fun horror movies of the early 80’s complete with Forecasting Madman.

The "They’s comin’" guy is the modern "That place has a death curse!" guy.  It’s fun, and he was just gross enough and just goofy enough to have people giggling and nervous.  It was a fun shared scare.  Kind of ridiculous, but kind of creepy.

They kept the Matrixy, Crowy, shots to a minimum and the vampires were mostly allowed just to be scary and violent.  They couldn’t resist a few music video type shots, I reckon, but in general it was scary and kind of…raw.

Since the pacing was kind of deliberate (when you like a movie, you say "deliberate", when you don’t you say "slow") there probably should have been time to introduce or at least show some characters who became suddenly important later, and there was probably also time to show how the main characters figured some things out. It went from, "Our town is under attack by unknown madmen" to, "Vampires are vulnerable to sunlight!" without any reason for them to reason out or understand there were vampires.

Also, it would have been nice to know or have some hint of what the humans were eating for the first two weeks.  I guess takeout from the diner?  Attic biscuits?

It was edited really weirdly, which worked sometimes very well.  I liked very much that everyone was at the diner and sharing scraps of info, but we didn’t see what happened to them or how they got there.  That’s cool and rare, "show but don’t tell" storytelling, and it worked there, but…sometimes I need to be told.  Like, I wanted to know how the deputy stayed alive without being discovered or starving.  That was too big of a leap.  If the vampires were searching the houses, why wouldn’t they find someone who wasn’t hiding?

It was awesome they implied the vampires had made a deal with the "bait" girl beforehand without showing it, but it wasn’t awesome that the boarded up house was suddenly not boarded up when they needed to walk in or out of it quickly.

The "rules" were also really inconsistent.  Sometimes the vampires are strong and sometimes they are fast, but if someone is supposed to live, they are slow and suddenly vulnerable to bullets.  The people are supposed to hide against or under the buildings to avoid detection, but if it looks better to have them clustered in the middle of the street, then the vampires can’t hear or smell them.

The last half hour was like a dream sequence because of the weird cut when he gets back to the sheriff’s office and everyone has left, and suddenly there’s a blood-faced little boy essential to the plot.  Also, maybe I’m lame, but it looked like the evil bald vampire died in the thresher, (which ran without power or oil or breaking down for 28 days), but was part of the crowd cheering the Jungle Book Wolf Pack Challenge fight at the end.  I probably misidentified one.

And…there was one unforgivable scene.  The little-girl vampire almost destroyed all the good will the movie had built up.  It threw the entire theater out of it.  Nobody laughed, nobody gasped.  You could see it coming a mile away, and it wasn’t cool or funny, just offensively stupid.  It made no sense for her to be doing what she was doing or saying what she was saying.  An enormous misstep.  Angering.  Either there was some kind of mass delirium on set or someone financing the movie demanded they let his kid write a scene.  Awful.   Rant over.

Regardless of all of this…I liked it.  It absolutely looks better than most horror movies.  The gore is astounding.  The vampires are truly scary.  We’ve seen pure black eyes before, but not elongated like that, really.  It was great design, and the crowd was scared.  That’s the main point.  It was cool to feel like the main characters huddled in the attic, scared, because you could feel the nervousness of the people next to you.

It might be a better movie on DVD with some scenes that were obviously missing restored and a commentary to help you out (hopefully by Niles and Slade who were awesome in that Horror Department interview.  Easily another episode’s worth on the cutting room floor from that one), but it won’t be a better experience than in the theater.

Also, this happened.  When the sheriff raises the pot lamp and fries Drusilla, a guy in the audience shouted out: "Legalize it, bitch!"  That is probably the best guy shouting in a theater joke I have ever heard.  Howls of laughter.

But that mirthful moment aside, if you want a one sentence review, it’s this:  The audience was scared.

That’s what horror movies are supposed to do.  Mission accomplished.