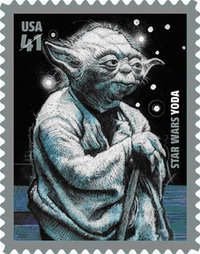 One of the souvenirs I carry around from my fresh-faced, Kerouac-inspired backpacking trips as a credulous 18 year old is a French fifty franc bill with the Little Prince on it. I remember being utterly amazed when I first landed in Paris and discovered that government currency did not need to feature the stuffy, saturnine visages of long-dead presidents (or creepy Illuminati symbols) but could, instead, be bright, vibrant and covered in cartoon characters.

When I came back from Europe, I remember showing my father the bill, positive he’d be delighted. I was not aware at that time of his problems with Les Grenouilles. He took the bill from my hand and scoffed, “Pfft. This is like having Bugs Bunny on the One Dollar Bill.”

Well… what of it, pops? I love my Dad, but ten years later, I’m willing to go on record saying that Bugs Bunny, Mickey Mouse, Betty Boop, Optimus Prime, Luke Skywalker and Spider-Man are just as indicative of the spirit of America as any stuffy president mouldering in his coffin in Virginia.

Likewise, some people sneer at novelty stamps under the bizarre and frankly pompous notion that anything short of an Eagle with a bundle of arrows in its claws is unfitting to the dignity of America. Me? I say slap Yoda, a little green gremlin with the voice of a retarded Grover, on every stamp. What could be more American than Star Wars?