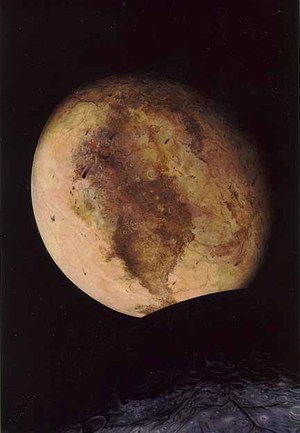 A recent NPR survey of songs about Pluto’s demotion from planetary status to that of an unspecified chunky piece floating on the edge of the solar system got me to thinking: will they have to go back to all those old 1950s movies and change any reference to Pluto as a planet? (If there are people nuts enough to want to digitize the cigarettes out of Bogart’s fingers, anything is possible.)

So I started to make a list of all the movies that take place on Pluto—only to discover that there aren’t any. None. Zippo.

There are any number of Disney shorts featuring the cartoon canine of the same name. Breakfast on Pluto is about an Irish transvestite cabaret singer. Eddie Murphy’s abominable The Adventures of Pluto Nash takes place on the moon. But the actual planet—ok, ex-planet—has been treated as badly by Hollywood as it is of late by astronomers.

How is this possible? With all the movies about the endless possibilities of space exploration, do you mean to tell me that not one filmmaker ever set a movie at the end of the known galaxy—which is to say, the beginning of the unknown universe? Fill me in—there’s got to be at least one movie somewhere that I’m missing.