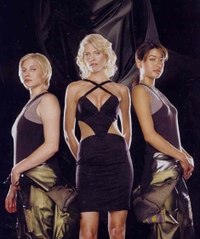 The excellent sci-fi blog SF Signal is asking readers what their predictions for the fourth and final season of Battlestar Galactica. It’s an interesting question: after four years of searching, we’re finally going to find out what happened to the Thirteenth Colony, and there’s a lot of different ways that could go down.

I’ve got my own little pet theory on what’s going to happen in BSG‘s final season when they reach Earth. My theory isn’t based on actual evidence or foreshadowing. It’s essentially the Planet of the Apes “It was Earth all along!” trick ending.

My guess? The BSG crew will never actually find the Earth they are looking for, because the lost colony never got there. Instead, they’ll crash on some other planet which will become Earth and be the cradle of our civilization.

It’s got some holes, definitely: if our Earth were seeded by aliens who actually knew how to achieve FTL space flight, why would it take them a few millions years to figure out the wheel? Still, I can’t imagine any other ending not being anticlimactic.

What do you think will happen in the 4th season of BSG? Let us know in the comments.

What Do You Want To See From: Galactica’s Final Season [SF Signal]