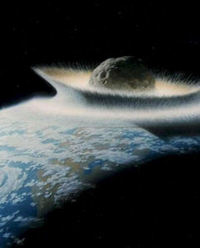 This week, a meteorite fell to Earth in Peru and is reportedly having an impact on the locals.  Reports are coming in that citizens are experiencing headaches, diarrhea and vomiting in the village of Caranca.  Seven police officers who went to investigate the meteorite also took ill. (Are they sure it was a meteor and not a public showing of Transformers?  Hi-yooo!)

If sci-fi has taught us anything, it’s that we should stay inside when something lands on Earth from space.  Didn’t anyone see The Blob? Of course, larger objects falling from space may not be so easily avoided.

As a primer course in what to do if a meteor hits the Earth, pop in some of these movies…

A Fire in the Sky (1978) – (Not to be confused with the 1993 alien-abduction flick, Fire in the Sky.) In this made-for-TV movie, astronomers discover that a comet is headed straight for Phoenix, Arizona.  When they attempt to warn officials, nobody believes them.

Meteor (1979) – A collision between an asteroid and a comet causes meteors to fly toward Earth,  including one that is 5 miles wide.  NASA is on the case and comes up with a plan to fire a nuclear weapon at the big rock named Orpheus.  But in order for the plan to work, the United States must team up with a Cold War Russia; only together can they defeat the menace from the stars. The cast boasts Sean Connery, Karl Malden, Natalie Wood and Henry Fonda as the president (a hot property since Irwin Allen’s bee movie, The Swarm, the year before).

Doomsday Rock (1997) – Another made-for-TV movie…this one starring William Devane as an astronomer who thinks a comet is on a collision course with Earth.  The basis for his belief?  It was prophesied in an ancient civilization’s time line. He cannot convince anyone of the danger (surprise!) so he and a band of followers take over a missile silo to act out the plot of Meteor.

Armageddon (1998) – A meteor is headed to Earth and the NASA experts figure that the only way to save the planet if to set off a nuclear device inside the rock.  Thus they enlist a ragtag team of oil drillers (led by Bruce Willis) and give them a crash-course in aeronautics.  The movie is so overflowing with testosterone that it oozes out of the screen.  But its still fun, in a Jerry Bruckheimer kind of way.

Deep Impact (1998) – A city-sized comet is discovered by Elijah Wood and it is learned that it’s headed straight for Earth.  Reporter Teo Leoni learns that the government knows of the danger but is keeping quiet to avoid panic.  This movie lacks the action of Armageddon – both competed for disaster movie dollars at about the same time – but deals more with the social aspects of the impending doom.  Who do we choose to save, for example?  The final scene shows an enormous tidal wave that can apparently be evaded by climbing up a low hill.