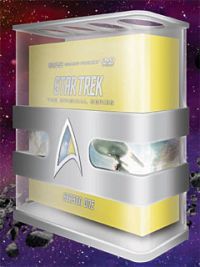 Likewise, a phaser’s a powerful weapon. It can, of course, be used to light cigarettes, perform Federation-mandated circumcisions and cauterize limbs hacked off by Klingons. And it’s also a nice role play device as you kick back and watch some Star Trek, aiming carefully at the aliens even as Captain Kirk does.

In a rather neat move, CBS and Toshiba are teaming up to hand out phaser-shaped remotes to anyone who buys both a Toshiba HD DVD Player and the upcoming Star Trek: The Original Series HD-DVD set. If you’ve always wanted a laser gun remote, this would seem to be a good opportunity for you, but I’m a little woogy about recommending anyone lock in to one high-def DVD technology over another before the war is won. But if you were planning on purchasing the new DVD set along with an HD-DVD player, this is a sweet deal.