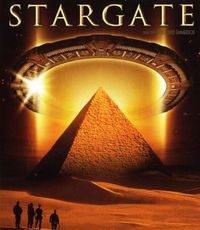 Michael Shanks, who played Daniel Jackson in the television adaptation of Stargate, talked to SciFi Wire about the upcoming direct-to-DVD movies Stargate: Continuum and Stargate: The Ark of Truth…which gives me an excuse to talk a little about Stargate.

For all the hoopla that surrounded the unexpected theatrical release of Stargate in 1994, I was never overly impressed.  Don’t get me wrong…I liked it, I just wasn’t blown away.  I liked the story well enough, and the Kurt Russell and James Spader characters were fun, but I thought the special effects were, well, unremarkable.  Perhaps I was used to seeing multi-million dollar blockbusters and the low-key effects in Stargate (which was mostly props and set pieces) were off-putting.

Then the show was adapted for television.  And it was good!  Really good!  After you get past the re-casting of MacGuyver as Col. O’Neil, it was actually one of the best sci-fi TV shows on at the time.  Just goes to show what I know.  I came in a couple of seasons late, but nothing a little DVD catch-up couldn’t fix.  And now it’s gone.  For some reason, Stargate: Atlantis didn’t grab me like SG1 did.