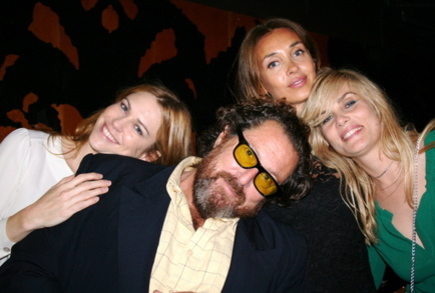 Artist and filmmaker Julian Schnabel demonstrated his talents as we snapped this photo last night at the Toronto International Film Festival. While iPOP captured (left to right) Marie-Josee Croze, Olatz Lopez Garmendia, and Emmanuelle Seigner — the women from from his new film “The Diving Bell and the Butterfly” — Schnabel playfully took charge to direct the shoot, insisting on more and more shots until he himself popped in for some of the action. The impromptu, private photo call played out on Tuesday night at Miramax’s cozy, friendly dinner at Toronto’s uberhip Drake Hotel celebrating Schnabel’s Cannes award-winner. Based on Jean Dominique Bauby’s 1997 book “Le Scaphandre et la Papillon,” Schnabel’s French-language film of the same name — translated as “The Diving Bell and the Butterfly” — looks at Bauby’s life. A noted journalist from France, Bauby was the editor-in-chief of the French magazine, Elle before suffering a severe stroke which left him mute and paralysed. Unable to speak or write, he composed his autobiography entirely by dictation through a series of blinks and some grunts, dying in France three days after the book was published. Schnabel is also here in Toronto with a documentary, “Lou Reed’s Berlin” about the recent tour for Reed’s much maligned 1973 album which is now regarded as a classic.