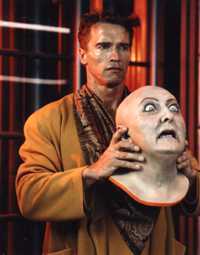 Like many youths pubescent in the early 90’s, the entire direction of my adult sexual life was irredeemably warped by the Triple Breasted Prostitute of Total Recall.

Now, I don’t want to sound like three breasts is the only thing I look for in a woman. But Total Recall set expectations pretty high, and the vista of my adult sex life is filled with just so many failed relationships… loves lost and gone, like teardrops in the rain. And I’m not the only one: a certain drunken admission of lust for that Triple Breasted Prostitute amongst midnight drinks with the fellas can not be a bizarre anomaly limited entirely to my own social circle.

But my fondness for Total Recall extends beyond extraneous latex breasts. It’s still a great sci-fi film… the first movie outside of Blade Runner to get the spirit (if not the unfilmable literal translation) of a Dick story right. It’s also the first film that truly captivated me with existentialist layers of presumed reality and consciousness.

And let’s not the presence of Arnold Schwarzenegger blind us to the fact that Total Recall is a smart film. The ending, in particular, is brilliant: unlike most films, Total Recall fades to white, the insinuation being that the entire adventure was in Quaid’s head, and he’s been lobotomized on the table at the memory clinic.

I’ve always thought Total Recall was a poor film to make a sequel to, but that was just what was intended. Bizarrely, the film that eventually became Steven Spielberg’s Minority Report was originally conceived as a sequel to Total Recall, with the psychic pre-crime vegetables being the children of Martian mutants.

Now, it looks like there may be another sequel in the works. It’s all wild, baseless speculation, but perhaps it could be done. Really, to be done right, Total Recall 2 needs to ditch the entire Douglas Quaid bit and focus on another film in the same setting, with the same themes of memory and identity. Arnold no longer being available will make it easier for the studios to do the right thing.