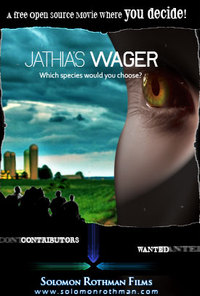 Solomon Rothman is an aspiring filmmaker with a vision, but not a whole lot of money.

He has an idea for a sci-fi film titled Jathia’s Wager which he describes as "a science fiction story about a young man living in an isolated community of humans, who must make a life changing decision about his future and his species."  He has posted a short, initial script and invites the world to tweak, rewrite and otherwise start filming it.  In his video appeal to the world, he shares his vision of multiple versions and scripts. He hopes for enough volunteer participation to make the film a reality.  Is this the world’s first open-source sci-fi film?

I’ve read the short script. Basically, a community of humans has been preserved in isolation while the rest of humanity has evolved at exponential rates. The idea isn’t a bad one, at least in terms of science fictional quotient. You have evolution, social sciences and a little bit of Singularity thrown in for good measure. Whether this open-source idea yields any results…time will tell. It’s certainly a new way to approach filmmaking, though what anyone can gain from such a venture is still unclear. Notoriety? Experience? How about a little cash?