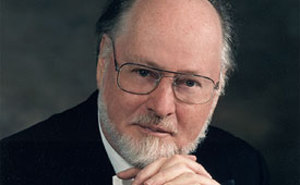 As a newcomer to this blogging business, I have been informed that I am not doing my share of bloviating whining about things that everyone in the world likes except me. My apologies.

Here’s one that’s been sticking in my craw since about 1981: am I the only person who finds the scores of John Williams hugely overrated?

Sure, his theme for Jaws was clever, and the Star Wars theme does its job when you look at it the movie as simply an homage/parody of the cheesy Saturday matinee movies that children of an older generation grew up on.

But by the time he got to Raiders of the Lost Ark, he had clearly learned how to grind out the McMusic. You used to be able to tell if a film was scored by him within a few seconds, at least until so many other composers got in the habit of imitating him.

This past weekend, the New York Philharmonic devoted not one, not two, but three nights to a program conducted by Williams, primarily of his own music. Modestly titled “The Best of Hollywood,” the show was praised this morning by the New York Times in the smarmy tone that paper tends to use when they’re trying to pretend to be “populist”:

Mr. Williams, who at 75 still conducts with kinetic energy, has taken flack from patronizing (and no doubt jealous) “serious” composers for the hyperexuberance and heart-tugging sentiment of his film scores. Still, he is a highly skilled and creative craftsman with dramatic flair, a keen ear for harmony and a proven knack for writing uplifting themes that are impossible to forget.

You can say all the same things about Barry Manilow.

I tried to find some blistering dismissals of Williams on the web to bolster my opinion. I failed. I’m sure there out there somewhere, but after a half hour I got tired of wading through page after page of Williams deification.

Well, that doesn’t change my mind any. And don’t try pointing out to me that Williams has won five Academy Awards. Anyone that popular with the Oscar voters can’t possibly be any good. Remember, it took the Oscars until this year to recognize Ennio Morricone, and only with an honorary Oscar at that.