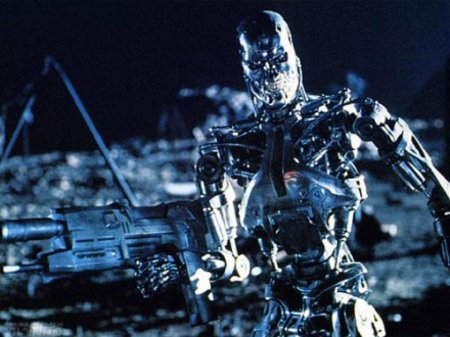 According to Jammes Middleton, consulting producer for The Sarah Connor Chronicles, Terminator 4 — currently being rushed for a pre-strike production — isn’t the only Terminator film coming. The current plan is an entire second trilogy, with Terminator 4 premiering in 2009.

That sounds just swell to me. But according to current scuttlebutt, only one of the new movies is to be set during the War Versus the Machines. But why not all of them?

I’m fine with a new trilogy of Terminator movies, but they really need to ditch the time travel aspect and focus on the war against the machines. The first three films are about attempts to avert the apocalypse, and at the end of the day, the first trilogy makes it clear that you can’t change the past, only delay it. Any films with a time travel device lose a lot of their dramatic impetus, because in the Terminator universe, it’s been well established that any attempts to change the past must fail.

The second trilogy needs to simply soak up the expense of doing a story arc in the Skynet Apocalypse. That’s really all that anyone’s wanted to see since the opening minutes of Terminator 2 anyway, and at this point, the only direction the story can go is in beating Skynet in the future.