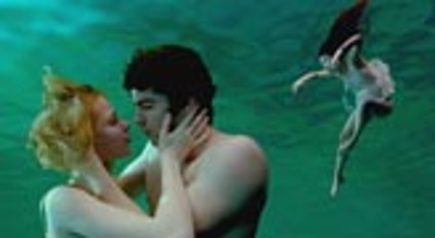 On John Schaefer’s WNYC show "Soundcheck"
yesterday, Julie Taymor and Elliot Goldenthal discussed the use of Beatles
music in Across the Universe, which
opens tomorrow.

Taymor, the film’s director, was
asked how she narrowed a field of over 200 Beatles songs to the 33 that are
heard in the film. "It was very story
driven," she responded. "There’s only a
half hour of dialogue, so these songs are the words coming from the heart of
these characters…90% of the singing is live…what you get is real, honest
performances and no disconnect between the dialogue and the singing…you don’t
feel that corny setup that you get in old fashioned musicals."

Goldenthal, the film’s composer,
said he had "a set task, a set problem to solve, and many of those problems are
technical…the key of the song to fit the performer, its tempo, its dramatic
function."

The changes are glaringly apparent
in the film’s version of "I Want to Hold Your Hand," stripped down and slowed
dramatically. It’s sung by Prudence
(T.V. Carpio), a high school girl pining for another high school girl. And it does force a reassessment of the
song’s lyrics and intent, especially when you consider that the members of
Beatles were criticized early on because their long hair and use of falsetto
was seen as not sufficiently masculine.

The big question, of course, is
How Dare You? mess with what Schaefer called "some of the most beloved songs of
the last half century." Neither Taymor
nor Goldenthal sounded too intimidated. Taymor noted that "we’ve had forty years of Beatles songs being sung by
hundreds of people… I was aware of the risk, but the burden and the honor was
simultaneous." And besides, incurring
wrath is part of the Beatles tradition.