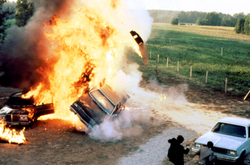 Earth, air, fire, water… Horror movies are full of elemental imagery. Best horror movie featuring water? I’d vote for Gore Verbinski’s version of The Ring. Earth? That stuff’s everywhere in horror, but Brian De Palma deserves special recognition for the energy with which he’s threaded his obsession with (live) burial through his films – especially 1984’s Body Double. Air is a little harder to nail down, but that too gets special treatment in films like The Exorcist, The Shining, and both versions of The Thing, in all of which (very) cold air is so important that it’s almost a character in itself.

And then there’s fire. Whether it’s a source of evil (Firestarter, Carrie, etc.) or good (Carrie again, and just about every Universal horror film ever made), fire symbolizes human uncertainty in the face of the unknown. It holds the darkness back – which is good – but it’s also indiscriminately destructive, which can be… problematic.

Nowhere does fire work its ambiguous, elementary magic more effectively in horror films than when it’s at the end of a torch. Torches WAVER. Their light is bright one moment, dim the next. They can drive the monsters off or burn the haunted mansion to the ground, but they can also turn and catch you on fire — or else go out just when you most need them.

M. Night Shyamalan – whose films always look good even when they’re messed up in other ways – caught the magic of torches and fire brilliantly in 2004’s The Village. Fire hasn’t shone forth in all its primordial good/bad glory in a horror film since Edward Woodward went up with the livestock in The Wicker Man.