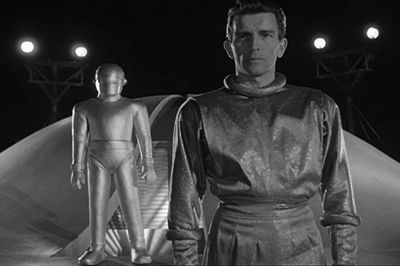 Not that you guys need to be told this, but the original The Day the Earth Stood Still is one of the best, if not THE best, science fiction films from the 1950s.

That’s why some fans are worried about the remake. Forget the fact that the Michael Rennie part will be played by Keanu Reeves. I will restrain myself from making any cheap jokes, not even to wonder  if we can look forward to him saying, "Klaatu barada nikto, dude?" Though who could blame him – it does kinda roll off the tongue. Go on, try it!

Here’s an assessment of the original, for those of you who may need a little brushing up, from the blog AlanSmithee.5u, that looks at it from a worthy perspective: how it generally fails to fit the standard cliches of 1950s sci-fi movies.