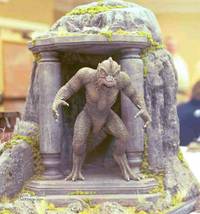 Amongst film buffs, you would be hard pressed to find anyone who isn’t dead-set against colorization… that garish process of digitally painting the argentine and saturnine films of the past with the lurid, uncanny-valley flesh tones of Technicolor as invented by Caesar A. Romero’s Joker.

Ted Turner is the devil of the anti-colorization movement, but his goals were honestly benevolent: he wanted to help inspire a love in classic film in people who found black and white to be an aesthetic and technological barrier to psychological entry. And while I don’t understand people who can’t love a film because it’s shot in black and white, I’ve gotten to the point in my life where I no longer judge them harshly for it: I can’t stand the 8-bit graphics of Pac-Man, for example, or reading novels in medieval English, but that doesn’t make me a low-brow.

But Sony Pictures has just announced a set of colorized sci-fi classics that has piqued even my interests: the Ray Harryhausen in Color gift set, due on December 4th.

The six-disc boxed set features two-disc special editions of It Came From Beneath the Sea, Earth vs. the Flying Saucers and 20 Million Miles to Earth: 50th Anniversary Edition. You can turn off colorization on the fly and, oh be still my ichorous heart! You get a collectible Ymir figurine with the set.

I love the idea of seeing some of Harryhausen’s creatures in color, and I love how respectful Sony is being with the treatment: the colorization is just an enticing extra, not a questionable technology forced upon the Harryhausen completist. For $60 bucks, this is a no-brainer for a stop-motion junkie like me.