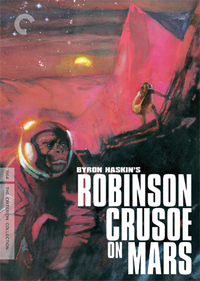 As might be surmised by the cleverly disguised title, this is a retelling of Daniel Defoe’s literature classic Robinson Crusoe…in spaaaace!  In it, two astronauts and an astromonkey named Mona fly to Mars, must avoid a collision with a meteor, get stuck in orbit around Mars, and must evacuate the ship to land on the planet’s surface.  One of them dies.  (Holy letdown, Batman!)   The remaining two survivors meet a decidedly human-looking native and give him the nickname "Friday".  Friday, it turns out, is actually an escaped slave and his masters, armed with heat rays – of course! – come looking for him.

Alas, Robinson Crusoe on Mars is but one of my failings as a dedicated sci-fi fan. I haven’t seen it.  But it actually sounds kind of neat.  Maybe I’ll give it a go.  I’ve enjoyed other science fiction renditions of classics, like Disney’s Treasure Planet (Robert Louis Stevenson’s Treasure Island…in spaaaace!) and the book The Stars My Destination by Alfred Bester (Alexandre Dumas’ The Count of Monte Cristo…in spaaaace!).  Maybe this will be the hat trick.  In spaaaace!