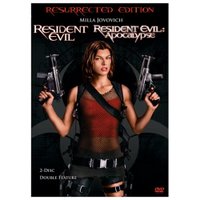 Here’s how much faith its distributor has in the value of Resident Evil: Extinction: at least in my neck of the woods, the preview screening was off limits to critics. That means that even had I scammed a ticket from someone, I would have been blocked at the door (unfortunately the publicists all recognize me).

Did that mean that I’m would be prevented from reviewing the movie? Of course not – it just meant that I would have to wait another 17 hours to see it. So how is that worth p***ing reviewers off? Seems to me it’s just more likely to put us in a bad mood when we do get around to seeing the thing.

Well, I summoned up all of my critical objectivity and went to see RE3 this afternoon. I enjoyed the first two movies, in spite of (or more likely becasue of) the fact that I don’t play video games. That may mean that I missed fine shades of meaning in these movies. I would be disappointed to hear that, though, because what I like about the Resident Evil series is that it’s loud, mindless, violent fun that makes me feel like I’m a teenager at the drive-in again.

I should also admit that while I recall that I had fun watching Resident Evil and Resident Evil: Apocalypse, I don’t remember all that much about them. Unfortunately, Extinction is not the kind of movie that takes into account that any of its viewers may not remember its predecessors in excruciating detail.

Milla Jovovich is back, of course, bearing almost no resemblance to the comparative waif of the first film. She stomps around in leather hot pants and a western duster, wiping out zombies with superhuman powers that came from I have no idea where. And she looks fetchingly fierce while doing so, despite enough make-up to make her look like a department store mannequin. (Or was that supposed to indicate her progressing dehumanization at the hands of the continuing experiments the Umbrella Corporation is conducting on her? Naaaaah.)

There’s probably no point in me recounting the plot, other than to say that it combines equal parts of Day of the Dead, The Road Warrior, and the Alien films, with nods to The Matrix and The Birds. The ending is anything but conclusive, and in fact indicates that there will be more sequels. (Wasn’t this supposed to be the “final” part? Like that ever happens.) Oh yes, Jill is gone. I don’t remember her, but the fan boards seem to find that significant.

In the end, Resident Evil: Extinction is less of a sci-fi movie than a monster movie in sci-fi drag, skimping on the interesting implications of a world depopulated by a raging virus in favor of non-stop zombie hacking and squishing. The key line of dialogue, delivered by one of our truck-drving heroes: “That was a juicy one!”