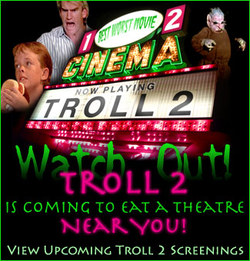 There’s a pretty strong tradition of the Midnight Movie, and more often than not the film being shown is from our genre of choice.  We own the late-night.

When you’re a kid, it’s cool to break the rules and stay up past any reasonable bedtime, and when you’re grown up, it’s fun to see all the kids having a good time.  There’s a kind of festival atmosphere and, usually, the film itself is almost secondary.

Secondary in title as well is Troll 2 which is making the rounds this Summer/Fall, touring from town to town with it’s unparalleled melange of pitch-imperfect dialog and garage refrigerator special fx.

Here’s a link to the tour site and some info on a documentary about the movie:  Troll 2 Rules if By "Rules" You Mean "Is Terrible."

Later today we’ll have an episode of the Horror Department video documenting the Troll tour’s visit to NYC.  Watch for it!