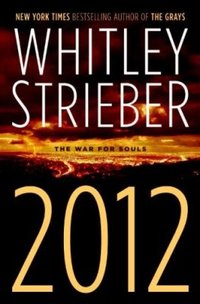 How do you follow up the production of a blockbuster movie like Transformers?  If you are producer/director Michael Bay, it just might be by helming the adaptation of Whitley Strieber’s recently-released science fiction book, 2012: The War for the Souls.

Strieber recently confirmed to SciFi Wire a rumor that Bay is interested in directing the film version of his book. Strieber said, "I don’t know if he will direct it for sure, but I know he is interested in directing it. Michael Bay’s company did buy the rights to 2012, though, and he will at least produce it."  IMDB already lists Bay as the director whose other directing credits include The Rock, Armageddon and The Island.

Strieber’s story is about a parallel Earth and the doorway that connects it with our own Earth.  On the other side are reptilian invaders that will enslave humanity and "feast on their succulent souls".  (I hate when that happens.)  The book is not a direct sequel to his previous novel, The Grays, but it is sometimes mistaken for one.  The Grays is also headed to film with Wolfgang Peterson at the helm. Other Strieber stories that already have been adapted to film are The Hunger and Communion.

The significance of the year 2012 is in reference to ancient Mayan civilization and their profound knowledge of astronomy. They created a cyclical calendar that eerily predicts the rise and fall of societies. The Mayan calendar ends on December 21st, 2012. Some believe this to be their prediction of when the world will come to an end.

Personally, I don’t believe in all that hokum.  But just in case…I, for one, would like to officially welcome our reptilian overlords…