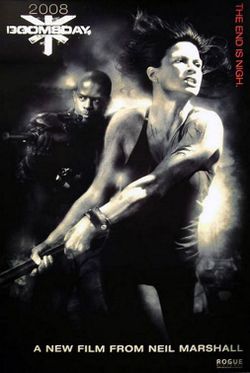 Since 2005’s The Descent, the name Neil Marshall has generated huge buzz in the horror world. And rightfully so. The Descent is one of the most effective, terrifying horror movies in the past five years. While it didn’t go out of its way to be original, it perfectly executed genre conventions and characters. Now, Marshall is turning his lens on an apocalyptic U.K. that has been ravaged by a deadly virus, according to the September/October issue of Film Comment.

Marshall discusses the film on its official web site. The cast is made up of some principal players from The Descent and Dog Soldiers, in addition to Bob Hoskins, Adrian Lester and Malcolm McDowell.

"We’ve built several massive sets, including a secret underground
government command centre and a 30-ft high wall designed to keep the
infected inside the hot zone, or kill anyone trying to escape,"
Marshall says describing the Mad Max-style
set. "We also have a bunch of mechanical geniuses who have constructed
a whole fleet of post-apocalyptic vehicles … Our main villain, the
brutal ‘Sol,’ drives an old Jaguar, the skins of his victims stretched
like hide over its body."

It’s good to hear Marshall expanding within his genre. Part
horror and part grind house, keep an ear out for more post-apocalyptic
buzz on Doomsday before it destroys cinemas in 2008.