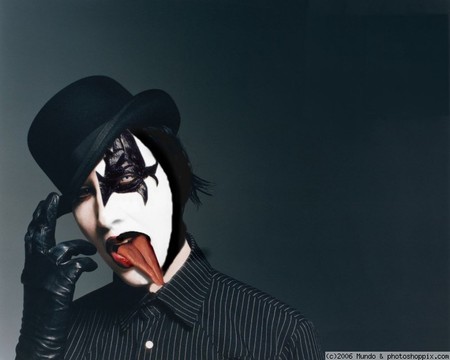 A leering emaciated ghoul with pointed, yellow teeth and one blank, milk-white eye. His fingernails are long and crimson, his arms covered in tattoos. He twitches psychotically and sways back and forth in the form-fitting outfit of a gothic clown. Every once and a while? He giggles… a high-pitched, nightmarish shriek.

Describing such a character, it would be no surprise to most if I said he was a comic book villain. Spiderman? As likely as any. But I actually mean to describe weirdo horror rocker Marilyn Manson. Of course, that’s not to say he isn’t also a Spiderman villain: apparently, he’s been sniffing his thin, powdered nose after a part in the upcoming Spiderman musical.

According to the musical’s director: “Marilyn just asked me if he could have a part in Spider-Man. The funny thing is, he really liked the music on my new movie.”

I have no idea what role is intended, but I would love to see Marilyn Manson in a dirty undershirt — a creepy, ancient looking pervert — lecturing a young Peter Parker in song that great power requires great responsibility. I think he’d make a consummate Uncle Ben. Although Manson in drag as Aunt May tickles me just as well.