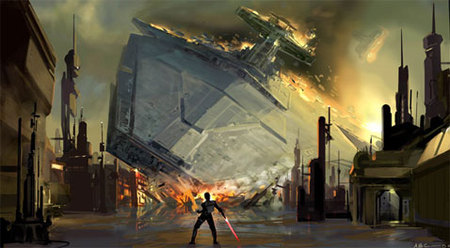 LucasArts has answered the dream of Star Wars enthusiasts across the globe with the announcement of a lightsaber game for the Nintendo Wii console.  The game is Star Wars: The Force Unleashed and they bill it as the "next chapter" of the Star Wars saga.  (Yeah, as if that would satisfy all the hopefuls who still believe that maybe – just maybe – Lucas will come to his senses and give us the legendary Episode VII.)

In Star Wars: The Force Unleashed, payers assume the role of Darth Vader’s "Secret Apprentice" (secret because we know there can be only an emperor and an apprentice on the Dark Side).  The events of the game take place between Star Wars Episode III: Revenge of the Sith and Star Wars Episode IV: A New Hope.  Darth Vader makes an appearance as well.

The game’s also boasts brand new marketing-term-driven technology called Digital Molecular Matter and Euphoria.  Combined with another technology, "Havok Physics", they ensure that in-game physics is realistic: wood breaks like wood, glass shatters like glass, etc.  Intelligence built into the characters is meant to provide unique game play every session.  Players also get to the "four core Force powers" of Force push, grip, repulse and lightning separately and in combination.

Star Wars: The Force Unleashed is expected Spring of 2008.

LucasArts Unleashes The Force On The Wii [Kotaku]