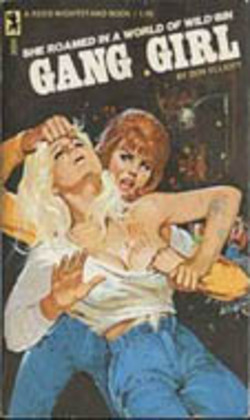 The sleazy-looking book pictured here was written by Robert Silverberg, one of a number of major sci-fi scribes who helped pay the rent this way during hard times.

At least one prominent publisher. William Hamling, came from the sci-fi world himself. Hamling knew that with the collapse of the sci-fi pulp magazines in the late 1950s, there were many writers in need of cash, and gave work to Silverberg, Harlan Ellison, Marion Zimmer Bradley and others (though apparently not Theodore Sturgeon, whom Vonnegut names as the inspiration for Trout.)

Hamling also published novels by such young writers as Lawrence Block and Donald E. Westlake, who went on to great success in the mystery field.

Look here for some more background into Hamling’s Nightstand Books, along with a lot of salacious covers and some clues as to who wrote what—great to know for you paperback collectors.