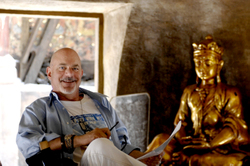 When Cinematical pointed to a blog by director Rob Cohen for The Mummy: Tomb of the Dragon Emperor (a specious sequel if there ever was one), I had to check it out.  Even though my gut tells me the film won’t be all that, I really enjoyed reading Cohen’s thoughtfully-written reasoning behind Rachel Wiesz‘  decision not to do the third installment of the series.

Explains Cohen, "Actors are just like other people, only more so, to paraphrase an old
saying. They are complex souls who have trained themselves to be
mirrors of reality, to show us who we are or who we hope to be. All the
technical side of film making, all the finest special effects would be
nothing without actors. Even in the magnificent Pixar films, the
actor’s voice gives life to the painstaking animation. Without them,
even the most brilliant technical achievements would fall flat."

An actor’s thought process deciding to do a role is beyond analysis.
Neither their agents and managers, nor their coaches, trainers, and
nutritionists can tell you what they are going to do or not do. I am
sure, like everyone in a creative process, a decision comes after a
labyrinthian journey but, even after 30 films, I cannot predict what is
going to happen.

"This left us with a problem and an opportunity. After much casting,
meetings, drinks, etc., I shot a day of screen tests with five major
actresses and the one that blew us away was Maria Bello. She had such
strong chemistry with Brendan (who generously did the screen tests with
all five), that it wasn’t much of a decision once I cut the film. She
had beauty and precision, humor, and an inner fire that has always
propelled her in films such as "THE COOLER" and "HISTORY OF VIOLENCE".
She had already mastered the English accent and brought a freshness to
the role. Also, she brought out several new shadings in Brendan. The
newness really worked and fit in to my hopes that my film would be a
"re-boot" to the franchise, not more of the same."

Even though he’s too gushy about Bello, I have to hand it to Cohen.  Anyone who takes the time to blog during the grueling filming of a movie is OK in my book.  The movie?  Well, time will tell.