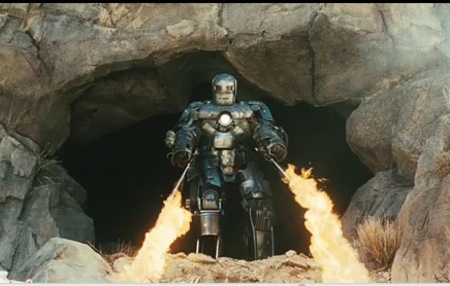 Apple.com is hosting the new trailer for Iron Man, due to be released in May, 2008. And boy, have they turned me around on the prospect of a film based upon one of Marvel’s most insufferably dull superheroes.

This is essentially the Comic Con teaser all over again, and for those of us who caught it the first time through our shady Internet connections, that’s not a bad thing. Everything about the Comic Con teaser was class: from Downey Jr. smirk, moustache and swagger as Tony Stark, to the riff from Ozzy when Proto Iron Man busts through the door, grabs his captors gingerly by their head and swings them face first into the wall at 2,000 pounds of pressure per square inch thanks to the massive hydraluics of his arms.

If the entire film can keep up half the spunk of the trailer, it’s going to be a classic. But at this point, all we’ve really seen is clips from the beginning of the film, which is the part I find the most interesting: Tony Stark’s escape from an enemy prison camp in home-made robot armor. After that point, I’m not sure if they’ll be able to keep my interest: to me, after the retro-furistic robotics of his origin, Iron Man, as a Marvel hero, is about as exciting to me as a glass of warm milk and bedtime promptly at 8.