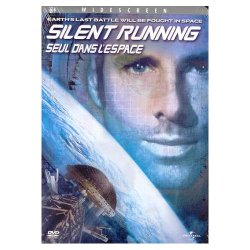 Some films set in the future paint a world we can only hope will arrive soon. I’m thinking particularly of Woody Allen’s Sleeper, in which Allen plays the manager of a Greenwich Village health food store who awakens in the future only to discover that everything he knew about nutrition was wrong: seems scientists have determined that the really healthy stuff is deep fat, steak, cream pies and hot fudge. Now there’s a future I look forward to!

But of course most movies about the future paint it as a less happy place, and those dystopias are what I would hate to see come to pass. Take the recent reporting on the creation of a global seed bank in Norway, where seeds from as many as 3 millions food plants will be stored. Like various national seed banks, the idea is to have a way to replenish the world’s food supply in the event of a catastrophe of global proportions, like a collision with an asteroid.

This reminds me of the 1972 movie Silent Running, a movie that isn’t as well known as it deserves to be. It takes place in a future in which all plant life has disappeared from Earth. The only remnants survive on 2000 meter freighters orbiting Saturn. The only crewman who cares about their mission is botanist Freeman Lowell (Bruce Dern). When the order comes to jettison the forests and return to Earth, Freeman has to find a way to save them in the face of mankind’s indifference.

Of course, the difference is that the global seed bank shows an effort to retain plant diversity. Still, the very premise of collecting all of the Earth’s plant life could, in some worst-case scenario, become the first step toward removing it under the argument that it can be brought back at a “better time.”

There’s a good in-depth description of Silent Running at Wikepedia. The film was directed by Douglas Trumbull, the special effects mastermind behind 2001: A Space Odyssey, Close Encounters of the Third Kind, Star Trek: The Motion Picture and Blade Runner. John Dykstra (Star Wars) also worked on the film. The script is by Michael Cimino (The Deer Hunter) and Steven Bochco, and the music is by, of all people, Peter Schickele (aka P. D. Q. Bach).