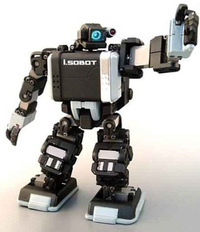 Robots used to be a figment of our imagined future.  Can’t wait?  You’re in luck.

Amazon is now accepting orders for Takara Tomy’s i-SOBOT, the 6.6-inch tall robot that the company bills as the world’s smallest humanoid robot.

17 custom designed actuators and a gyro-sensor – this is what gives the robot its balance so it doesn’t fall over and make you feel like you were taken for $300.  It also gives the robot its human-like movements, though the jury is still out on whether it can do a decent Michael Jackson moonwalk.

A speaking vocabulary of over 200 words and phrases and more than 200 pre-programmed movements – I’m not quite sure what I’d want my robot to say; I always imagined it as a silent slave.  As far as movements go, if I can get the thing to wash my car, I’d be all over this.

OK, I think I just realized the real reason why I want a robot.