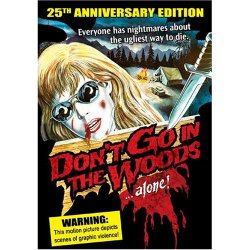 There are a lot of cheesy horror movies out there, a lot of bad ones, and when we say a lot, we mean a lot.  Why, we’ve even created a new number to count them all.  It’s…gorezillion.  There are a gorezillion bad horror flicks out there.

They are all beloved by someone, all have their devotees, and much of the time it’s precisely because they are bad.  Horror tends to lend itself to that kind of devotion more so than any other genre (well, maybe not Kung-Fu).  For some thoughts on why this might be…take the leap.  There are a gorezillion reasons to.

The reason there can be more bad horror movies than, say, romance movies is because people are more willing to give horror the benefit of the doubt.  When you see a dude fall for a chick he has no reason to care about or some annoying contrivance pops up to keep them apart, audiences cry foul because they have experience in that kind of thing.

When a creature crawls out of a black-watered lake and his costume wrinkles, you’ve never seen that before (well, in real life), so you let the filmmakers get away with it because of what they were trying to do.  There’s some leeway.  We’re a generous crowd.  It’s why studios will pick up a murky student film and stamp it to a DVD.  They know folks are generous and curious.

What horror has going for it is that it’s not supposed to be realistic, except for the moments when it tries to ground you in the real world…so it can throw you out of it.

When you look at popular lists of bad or good movies, you see the bottom list changes all the time, since people check them out and either feel sorry for them or decide they see something in it others don’t. So they add it to their favorites. They say you don’t like Hillbillies in a Haunted House because you don’t get it, but they do.

Dramas and Feel-Goods don’t have that same audience.  For everyone who’s forgotten Kate & Leopold, there are ten folks who dig At Dawn They Sleep.  That’s why there are so many.  They almost can’t miss.
Horror doesn’t have to be good to be good.