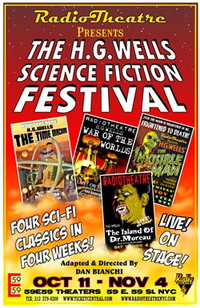 Radio Theater is presenting The H.G. Wells Science Fiction Festival October 11th through November 4th, 2007 at Manhattan, New York’s 59E59 Theater.  The festival boasts four adaptations based on Wells’ work:
The Time Machine, The Invisible Man, The War of the Worlds and The Island of Dr. Moreau.  Each production features original orchestral music and sound effects.

It’s no coincidence that the shows are scheduled around Halloween.  Wells’ The War of the Worlds is infamous for the 1938 radio play directed by Orson Wells that was broadcast on Halloween.  It was reportedly so realistic that it caused widespread panic.  Later studies suggest that this "panic" was far less widespread than newspaper accounts at the time suggested.  Could this just be another case of urban legend?

Wells is considered to be one of the "Fathers of science fiction".  (Jules Verne is the other one.  Two fathers — science fiction has a strange family tree.) For those who need to brush up on their Wells, it should be noted that the works of H.G. Wells are now part of the public domain.  So feel free to peruse in advance The Time Machine, The Invisible Man, The War of the Worlds and The Island of Dr. Moreau over at ManyBooks.net.  Then take a trip to Manhattan and get your sci-fi on.