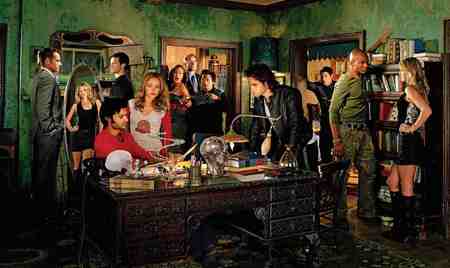 Even though I was late for a flight from Tokyo to Berlin, I couldn’t help asking my more nefarious Internet sources help me check out the Heroes Season 2 premiere. I won’t get into how I did it: something involving the extension of pineal gland of some Russian techno-underworld type which beamed the program directly into my brain.

The point is I liked it, but it certainly seemed like they’d lost — or, at least, reset — the momentum of the first season. The four month breather between the episodes allowed numerous characters to set up frankly pretty implausible aliases, go from governors to drunks and set up their own little cabals and plots. I suppose that series premiers are supposed to feel more laid back than finales, but ultimately, I felt there was a disconnect between the end of season one and the beginning of season two. Watching the season 2 premiere you can really tell they had no intention originally of continuing the first season’s character arcs and were rather stymied on how to set up a second season based upon the plot arc of the first.

I’m being fairly vague because I don’t want to get into spoilers for another couple days, but one thing I can mention: the mythical samurai that Hiro ends up meeting in the past, rather predictably, turns out to be a drunken white guy with no redeeming abilities whatsoever. I love the fact that Kensei ends up being an Englishman: you can readily imagine the writers furrowing their brows and ask themselves, “Gee, how can we get Hiro into Ancient Japan but not have to subtitle everything? I know, let’s give him a drunk British sidekick! Genius!”

My guess is that Hiro ends up being Kensei, but I suppose it could go the other way and Hiro could help him become the hero he’s meant to be. Any thoughts out there? What did you think of the Season 2 opener?